The CGA will be attending ICE in London next week. Paul Burns, CGA President will be participating in the ICE World Regulatory Briefing – New Markets Panel on April 11. On April 12, Paul will moderate the Global Markets Spotlight session on Ontario at 14:00 with Birgitte Sand & Don Bourgeois, who both played key roles in advising the Province of Ontario on the creation of Ontario’s recently opened regulated iGaming market.

GCA will be hosting a meet up (with cocktails!) on the Excel exhibit floor on Wednesday April 13 @ 16:00 in the ICE Pitch Stand N7-460.  A networking session for current and prospective CGA members, we will be joined by Ontario’s Agent General in London and other officials from the Canadian High Commission. 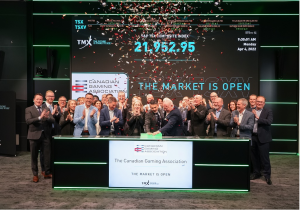 On Monday April 4 over 50 CGA members and industry leaders gathered at the Toronto Stock Exchange to mark the opening of Ontario’s regulated iGaming market. iGaming Ontario Chair Dave Forestell brought greetings from iGO and on behalf of the CGA, President & CEO Paul Burns led a discussion with John Levy, CEO of theScore, and Jordan Gnat, CEO of Playmaker Capital, on the potential for economic and business growth because of the new market launching.

A link to a video of the session can be found here – https://youtu.be/YOGP011XLZs

CGA in the Media