Bill C-218, The Safe and Regulated Sports Betting Act,first introduced by Kevin Waugh, MP for Saskatoon-Grasswood in February 2020 as a Private Member’s Bill, passed the House of Commons with all-party support on a recorded vote of 303-15 at Second Reading one year later.

The House of Commons Justice Committee heard from 32 witnesses and received 29 briefs, all in support of the Bill, including the horse racing industry which asked for and received greater protection. In that regard Bill C-218 became identical to the government’s own Bill, C-13, which was pulled to allow C-218 to go forward.

Bill C-218 reached the Senate in June. Thanks to the efforts of the Bill’s sponsor, Senator David Wells, as well as the Bill’s critic, Senator Brent Cotter, C-218 passed without amendment on Third Reading on June 22, 2021.

Canada has had legal sports betting for decades but only parlay bets were allowed, which is a bet on the outcome of two or more events. This is not what Canadians had in mind for Super Bowl or Stanley Cup bets, for example, as evidenced by their enthusiasm for using offshore betting apps that provided them with the sports betting experience they wanted.

In December 2019, the Ontario Provincial Police (OPP) broke up a Hells Angels-controlled illegal gambling ring in southwestern Ontario that earned $131 million over a five-year period.

Based on the average profit margin of 5 – 6% for a sportsbook operation, this single organized crime operation would have accepted close to $2.5 billion dollars in illegal wagers over the five-year period.

The recently released “Public Report on Organized Crime in Canada” by Criminal Intelligence Service Canada highlights the use of illegal gaming operations by organized crime groups as a “high-profit/low-risk market”.

“ Outlaw Motorcycle Groups collaborate with other Organized Crime Groups (OCGs) in the importation of cocaine and other illicit drugs, and have networks stretching across Canada that facilitate their well-established distribution lines. They are criminally associated to groups that form the Traditional Organized Crime network and are involved with Organized Crime Groups involved in illegal online gaming, which is seen as a high- profit/low-risk market.”

The report went on to remark that the organized crime groups use the illegal gaming operations to fund other forms of criminality.

“ Gaming networks generate millions of dollars of revenue each year, and OCGs involved in this market use these illicit funds to finance other forms of criminality, such as drug importing and trafficking.” 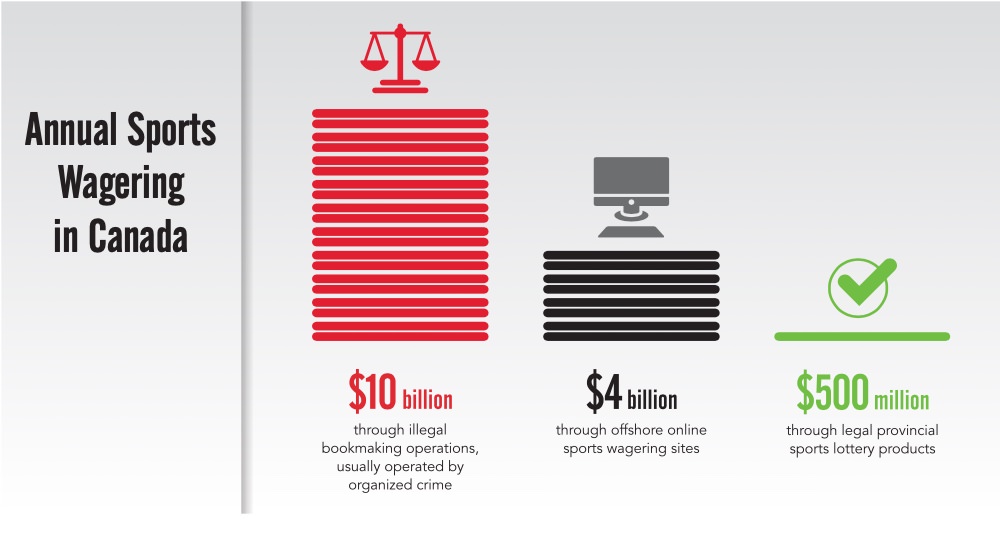 Supporting Jobs in Communities Across Canada

Canada’s gaming industry supports over 182,000 jobs across Canada with almost $12 billion in annual labour income, while purchasing over $14.5 billion in goods and services each year. There are currently 115 casino- style gaming facilities across Canada located in the ridings of 100 MP’s.

The majority of the states directly touching the Canadian border have live and approved sports betting, or have changes coming or under consideration for sports betting.

For border communities, opening a sports book will serve as an economic stimulus, create hundreds of employment opportunities, and generate a significant new tax revenue stream for the city. There is a real and rising threat to our industry from US border states and we can’t afford to be left behind.

Canadian provincial lottery corporations and gaming operators have implemented some of the most comprehensive programs that are decades ahead of jurisdiction like the United Kingdom, Australia, and the United States.

Strong Support for a Safe and Legal Option

Over past eight years the request to amend the Criminal Code to permit a legal and regulated sports betting regime has earned widespread support from provincial governments, business, communities, labour and sports organizations.

Throughout this time, these organizations have all supported stronger regulatory oversight of sports wagering in Canada and greater consumer protections measures at one point or another: